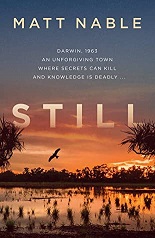 Darwin, 1963. An unforgiving town where secrets can kill and knowledge is deadly… when Senior Constable Ned sees a body in the shallow marshland he knows it is a bad death, but not that it was just the first. 23 year old Charlotte is an unhappy housewife to a cowboy and is suffocating in her life. On her way home one night she finds herself with a hand around her mouth. Both Charlotte and Ned will learn that the world they live in is full of secrets and it takes courage to fight for what is right. But there are people who will do anything to protect themselves and sometimes courage is not enough to keep you, or those you love, safe.

I have a lot of respect for Matt Nable as an actor and while this is his first book I’ve read, I have seen his movie 1% which he wrote as well as starred in. So I was looking forward to reading this, especially after also seeing consistently high reviews for this novel. It’s definitely a slow burner with high tension. There’s a lot of confronting issues at play in this story: corruption, racism, murders, violence, drunk and angry behaviours… you get the picture. I’ve seen this novel compared to Jane Harper’s ‘The Dry’ and Chris Hammer’s ‘Scrublands’; I would agree it has a familiar feel which I would put down to the descriptive writing, the slow pace, the crime in a regional Australian town and the intense characters. So overall, if what I’ve described  sounds like your kind of novel, definitely give this one a go.

I really enjoyed this refreshing and original novel. While this book might come across as light-hearted, I think it’s got some important messages in it in relation to addiction, rehabilitation, politics, standing up for yourself and others, redemption, friendship and so on.
After reading a few dark and heavy novels, this one felt like a lovely fresh light spring breeze. I’d highly recommend this one for anyone who enjoys rural Australian romance and/or rom-com movies; you’ll be in for a treat.
Time for a story. Every month, 3 mums escape their children for a monthly quiz night. If it's general knowledge, they aim for not last (sometimes they achieve that). If it's a theme, they aim a little higher. Last night was the Disney Plus theme. They allowed a special guest in their team, a true Star Wars lover. And.....THEY CAME FIRST. They are the Disney Plus champions now 🏅
This particular novel is inspired by the women who served in WWII Burma; I’m going to be totally honest and say I had zero knowledge of this prior to this book so it was quite fascinating. I highly recommend!