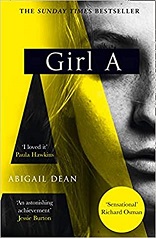 Lex doesn’t want to think about her family, and growing up in her parents’ House of Horrors; she was Girl A, the girl who escaped. When her mother dies in prison and leaves Lex and her siblings the family home, she can’t run from her past any longer. Together with her sister Evie, Lex wants to turn the house into a force of good. But first she must come to terms with her six siblings and with the childhood they shared.

This novel wasn’t quite what I was expecting. Given the main topic, I thought it would feel like a thriller or suspense read. But I think it was more of a domestic drama exploring the long term effects of the siblings, primarily Lex, given what had happened to them as children. This made it feel a bit slow and heavy at times. The storyline flicks between the present where Lex is tying to get her siblings to agree to making the house a community centre, to the past where it is slowly explained how the trauma occurred. The author has tackled an intense topic for her first novel and I think it’s a solid debut. For me the novel was likeable enough but average in comparison to other novels I’ve read exploring similar topics; I personally prefer in fiction the more morbid thriller details rather than looking at long term effects of the trauma.

Here we have a book addict, overwhelmed by the amount of new books at the library that look awesome. Despite having mountains of books already, she cannot resist and proceeds to reserve them all. Does she have time to read them all? No. Will she take them anyway? Yes.
I highly recommend this extremely well-written and absorbing historical fiction that will captivate readers - I honestly loved it ❤
*Non book related post*
Part romance and part women’s fiction/chick-lit, this contemporary novel makes for a compelling read. Whilst it’s an emotional narrative, it ultimately ends on an uplifting note.