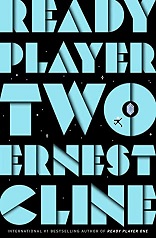 Days after winning OASIS founder James Halliday’s contest, Wade Watts makes a discovery that changes everything. Hidden within Halliday’s vaults lies a technological advancement that will change the world and make the OASIS a thousand times more wondrous and addictive. With it comes a new riddle, and a new quest from Halliday. But an unexpected, impossibly powerful, and dangerous new rival awaits, one who’ll kill millions to get what he wants. Wade’s life and the future of OASIS are again at stake, but this time the fate of humanity also hangs in the balance.

Okay, how to put this…I feel like although this book was enjoyable enough to read, this sequel wasn’t necessary. I thought ‘Ready Player One’ ended quite well and as soon as I heard that was a sequel I knew I’d read it but I was also weary (Ready Player One is one of my favourite books). To be fair, I liked this one more than what I thought I would. When the story starts I felt a bit disappointed because it seemed like the things that ended positively in the last book had now completely changed. In particular it felt like Wade himself had changed personality wise and it wasn’t for the better. I think the second half of this book was much stronger than the beginning and took it back to the elements that made the first book such a hit: the nostalgia, the cool quest tasks in a virtual world and friends working together.
Overall: an enjoyable, albeit unnecessary in my humble opinion, sequel to an excellent book.

This is a thoroughly enjoyable novel. Part historical fiction, part romance and part mystery, it is a very easy and engaging read.
Check out my 6 and a half year old's first ever book review ❤ for her homework this year she has to write book reviews for her library books. 100% homework I can get behind haha. She'll have her own book review blog in no time 😉
Thank you @craigsilveyauthor for writing this amazing novel. ❤
@janeharperauthor is one of my favourite authors and her newest is yet another one I really enjoyed. The plotline was clever with a few red herrings included to throw readers off track from guessing what happened...
Follow One Woman's Brief Book Reviews on WordPress.com