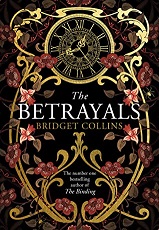 At Montverre, an exclusive academy tucked away in the mountains, the best and brightest are trained for excellence in the ‘grand jeu’: an arcane and mysterious contest. Léo was once a student there but lost his passion following a violent tragedy. Now he is exiled there in disgrace with his political career in tatters. But it has changed, even allowing a woman, Claire, to serve in the ‘grand jeu’s’ highest office of Magister Ludi. When Léo first sees Claire he senses an odd connection with her, though he’s sure they have never met before. The bond between them is strengthening but they have both built their lives on lies. And as the legendary Midsummer Game draws closer, secrets are whispering in the walls…

Okay, so I spent the majority of this book confused as to what the ‘grand jeu’ actually was. From what I gathered, it was a game of some kind that involved hand movements, math, poetry, music…but what it actually was, how it worked and what the purpose was, nope, no real clarification, argh! I honestly found it super frustrating and it distracted me from the storyline. On top of that, it is never clarified what year or location the story is set in. Some readers may not mind this ambiguity, unfortunately I am not that reader.
Putting that aside … the writing is good, really good. Even through my confusion I was being drawn in and wanted to keep going. Some chapters are from Léo’s perspective when he was a student; I enjoyed the changing relationship between he and another student, Carafax, although I didn’t really like Léo himself. In the current timeline I appreciated the difficulties experienced by Claire being the only female there who was clearly resented by others in this male dominated field.
Overall: I think readers who are open to something different and don’t mind a lot of ambiguity could really enjoy this book however I personally like more clarification and explanation when I read fantasy type novels.

I really enjoyed this refreshing and original novel. While this book might come across as light-hearted, I think it’s got some important messages in it in relation to addiction, rehabilitation, politics, standing up for yourself and others, redemption, friendship and so on.
After reading a few dark and heavy novels, this one felt like a lovely fresh light spring breeze. I’d highly recommend this one for anyone who enjoys rural Australian romance and/or rom-com movies; you’ll be in for a treat.
Time for a story. Every month, 3 mums escape their children for a monthly quiz night. If it's general knowledge, they aim for not last (sometimes they achieve that). If it's a theme, they aim a little higher. Last night was the Disney Plus theme. They allowed a special guest in their team, a true Star Wars lover. And.....THEY CAME FIRST. They are the Disney Plus champions now 🏅
This particular novel is inspired by the women who served in WWII Burma; I’m going to be totally honest and say I had zero knowledge of this prior to this book so it was quite fascinating. I highly recommend!