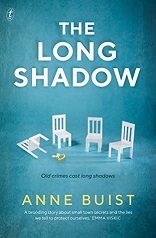 When Isabel first moves to Riley, it looks like any other small outback town. The town relies on the local hospital which Dean, Issy’s husband, has been called in to investigate and perhaps close. Issy is a psychologist with a toddler and decides to run a mother-baby therapy group. On the first day she gets an anonymous note from one of the mums: “The baby killer is going to strike again. Soon”. Then a series of small harassments begins. Is it a hoax or an attempt to scare Dean? Or is there a serious threat to their child? After all, a baby was murdered in Riley before…

I quite liked this book. The entire book is set from Issy’s perspective as she navigates moving to a small town so her husband can investigate the local hospital. As you can imagine, the townfolk are not really happy with this. Issy starts a mother-baby therapy group with a group of five women. The sessions and conversations with those women are probably the parts of the book I enjoyed the most; I think it highlighted a lot of different anxieties, stresses and experiences that many parents can have. The storyline around the previously murdered baby was interesting and I think the outcome of that was quite unexpected and clever. For me though the last few chapters felt really rushed; I had to go back and re-read parts as certain things didn’t quite make sense to me at first.
I think a lot of readers would enjoy this novel.