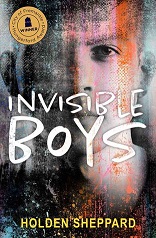 In a small town, everyone thinks they know you:
Charlie is a hardcore rocker who’s not as tough as he looks. Hammer is a footy jock with big AFL dreams and an even bigger ego. Zeke is a shy over-achiever who is never macho enough for his family.
But all 3 boys hide who they really are and when the truth is revealed, will it set them free or blow them apart?

It’s hard to write this review without giving any spoilers but what I can say is that this is an important book that should be read by young adults as well as adults, and should be available in every high school. It delves into the lives of three young men struggling with their homosexuality, particularly in a small town full of judgement. This story made me feel so many things (I laughed, I cried…) and when I finished it I felt like I was in a very heightened emotional state. There are graphic sex scenes, and domestic violence and suicidal intentions mentioned so be aware of that if those things are triggers for you.
The story is told with alternating chapters from each of the three boys as well as ‘letterbombs’; the letterbombs detail a male’s suicidal intentions and I found them to be so powerful, particularly when you are thinking it could be any of the main characters and it is only revealed near the end who it was. I would encourage readers to make sure they read the author’s acknowledgments as it really just adds to the book.
This novel truly is an amazing, powerful, extremely well-written debut with such an important message. I look forward to seeing what comes next from this author.