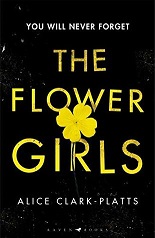 Laurel and Primrose are the Flower Girls. Nineteen years ago, one was convicted of murder and the other got a new identity. But now another child has gone missing. So the Flower Girls are about to hit the headlines again…

This novel is quite compelling. It’s always a seriously creepy thought that there are rare children out there who murder other children, and this book plays on that creepiness. This is particularly in play with the flashback sections which briefly look at what happened when the Flower Girls were small. Also fascinating is the follow on effect on both the victim’s and the perpetrator’s families for the rest of their lives, that effect being influenced by the media. There were a few twists throughout the storyline including a couple of big ones; one which I would consider the main secret/twist I saw coming and the others I didn’t. There were a few unanswered questions for me but that didn’t lessen my enjoyment of the book.
Overall this is quite a suspenseful story which fans of psychological thrillers could enjoy.